Swami Vivekananda was an Indian Hindu monk, philosopher, and writer. His childhood name is Bor Narendranath Datta, he was a chief disciple of the 19th-century Indian mystic Ramakrishna. His guru Ramakrishna Paramhansa gave him this name.

Swami Vivekananda was a Hindu monk and a famous spiritual leader in India. It was more than a spiritual mind. He was a prolific thinker. he is a great public speaker and a Passionate Patriot.

He was born on 12 January 1863 on the occasion of Makar Sankranti in Kolkatta. His father’s name is Vishwanath Dutta who is a very successful lawyer and his mother’s name is Bhuvneshwari Devi who was a woman with a strong and godly spirit who was a great influence on her son. 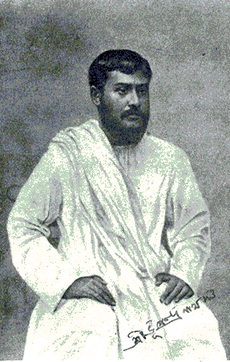 He was one of the eight children of his parents. He stands in his studies. First, he was in the metropolitan region and later at the college of the presidency in Calcutta.

After his father’s death in 1884 caused Narendra to find himself in considerable financial hardship, as he had to support his mother and his younger siblings. He asked Ramkrishna to pray to the goddess for the financial well-being of his family.

At Ramakrishna’s suggestion, he went to the temple himself to prey. but as soon as he faced the goddess he could not ask for money or wealth, but instead asked for Vivek and Vairagya that day marked Narendranath’s full spiritual awakening and he was drawn to an ascetic way of Life.

Brahmo Samaj recognized a god in opposition to idolatry and superstition worshiping Hinduism. To satisfy his intellectual search for God, Narendranath used to visit prominent spiritual leaders of all religions and ask them one single question: “Have you seen God?” Each time he left without a satisfactory answer.

He asked the same question to Sri Ramkrishna at his residence in the temple precinct of Dakshinewar Kali. Without a moment’s hesitation, Sri Ramkrishna replied, Yes I have seen God as clearly as I do. We will see each other, just in a much deeper sense, Vivekananda was initially unimpressed by Ramkrishna’s simplicity. he was amazed at Ramkrishna’s response. he gradually won over this contentious young man with his patience and love. The more Narendranath Dakshineshwar visited, the more answers his questions received.

Conference in the World Parliament of Religions

He faced insurmountable difficulties on the way to Chicago, but his mind remained as untamed as ever. On September 11, 1893, when the moment came, he took the stage and surprised everyone with his opening line, “My Brothers and Sisters of America”.

He received a standing ovation from the audience for the opening movement. He went on to describe the principles of Vedanta and its spiritual meaning and to put Hinduism on the map of world religions.

A spiritual genius of commanding intellect and power, Vivekananda crammed immense labor and achievement into his short life, 1863-1902.